Fellow researchers have sent me this photo (see link below) of what appears to be a baby sun in the line-of-sight of our Sun. It is likely a comet among the comet swarm which is gravitationally captured by what NASA has termed "a probable brown dwarf star" (see 2nd link below); or this second baby sun may even be NASA's announced brown dwarf star, itself.

On the Ecliptic -- that imaginary lazy-susan in space, on which our nine planets revolve around the Sun -- visualize yourself as…

Could PX Be Pushed Out Of Its Orbit? If So, What Are The Implications?

I was pondering on how all things interrelate.  There is a brown dwarf heading toward us which creates a disturbance in our solar system, which has independently (of PX) moved into a busier part of the galaxy (when we entered the age of Aquarius?), and there is a 26,000-year galactic alignment scenario, all going on at the same time.  Imagine the energy involved in all this.

So the question that arose from these musings is:  how can we know if PX will stay in its orbit as it has in…

No matter what timeline you choose to follow, just keep preparing.  Don't let things like timelines lull you into complacency.  One reason to keep preparing is that survival food is still available.  We don't know what the case may be even in…

Drought A Major Concern For US Crops This Spring

Here is an interesting quote:  "Pole shifts are regular occurrences and are happening to every planet in our solar system right now."  Could it be because of the influence of a large celestial object?  Otherwise, why else would all the planets be doing the same thing at the same time?

That is interesting. This satellite was due to scan the atmosphere for aerosol and carbon inside Earth atmosphere. It it not the first crash. The pPTB are very clever, I must say. How convenient to prevent such a satellite to discover how much our air quality is manupulated the them. here is the whole story: 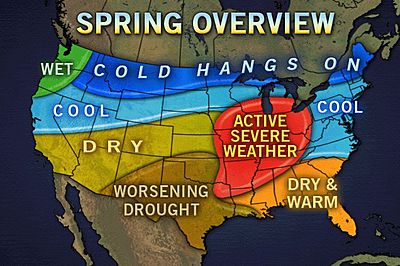 Euthanized Puppy Rises From The Dead

I have been woefully lax when it comes to adding friends on this NING.  And I may be wrong but I am unable to see content posted by non-friends so I am starting a friending campaign as of today....Please those on my friends list recommend viable options so that I don't just send out blanket invites.....Cheryl if you don't mind can you provide a list of…
Continue

How To Start A Food Storage Program

Storage food is food that has a longer-than-normal shelf life.  It is usually grains still in their original shells/hulls (like Hard Red Winter Wheat or oat groats) and dehydrated or freeze dried.  Olive oil and honey have natural long shelf lives.  Does that mean you have to invest big bucks into Mountain House or other long-term-survival-food products?  No.  There is plenty you can get at your local supermarket and lengthen its shelf life yourself (such as placing in plastic buckets with…

MAGNETIC STORM IN PROGRESS: A solar wind stream hit Earth's magnetic field during the early hours of March 1st. The impact sparked a geomagnetic storm that was, at first, minor, but the storm has been intensifying throughout the…

Federal Gov't Closing Off All Caves

The big earthquakes are coming very soon -- maybe in a few weeks. I am rather sure that Planet X is coming up into the Ecliptic from below the Ecliptic. It should now be shoulder-to-shoulder with Jupiter on one side of it, and the Asteroid Belt on the other side of it. Because X is being gravitationally sucked toward the Sun, this means that Planet X will be traveling…

Is Qaddafi Working With Mossad, Ties with Tony Blair and Silvio Berlusconi of Italy?

It appears that Qaddafi has a history with Mossad along with significant investments in Europe. Interesting to note, Qaddafi's son, Saif has ties with Nat Rothschild.

Don't hear about very many quakes in Texas.