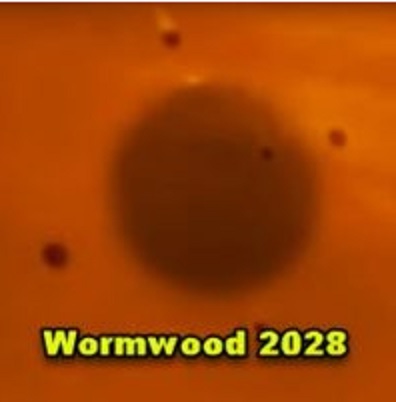 Here is the image as captured from the SOHO LASCO C2 camera, which NASA cameras captured on 07/05/20... 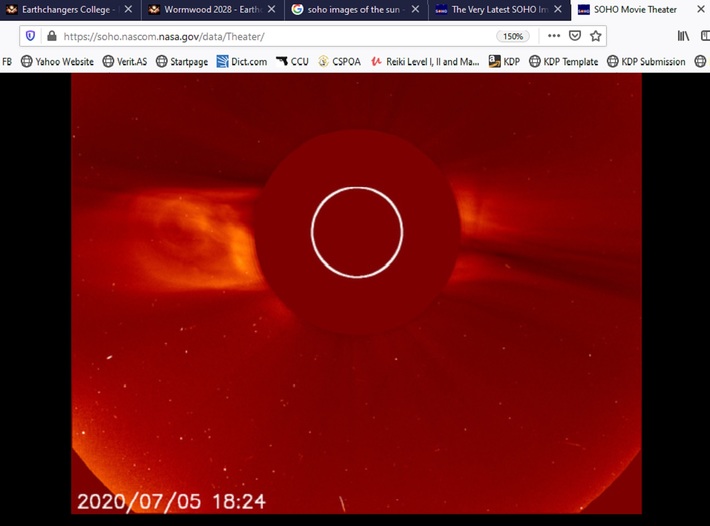 PX is passing behind the sun on this leg of its 3,600-year orbit.  The next image, below, is the same image with arrows added, the top one showing the larger orb, the bottom one showing the shadow of a smaller orb...

The next image shows a remarkably clear image of a rock (asteroid?) just outside of the shield, at the ~2:45 position.  I used the plaster filter in Photoshop to capture this otherwise indistinguishable object...

Wow!  What a close-up of that PX object, isn't it?

Okay, the next image used the film grain filter.  What became obvious is the amount of smaller objects on the left, as compared to the right of the shield.  Since PX is moving left to right on a northerly incline, this may be a way to track it's progress, as smaller objects become visible on the right side of the shield, climbing toward and above the north pole of the sun....

So, there you have it.  PX is real.  And it's inbound.  What's next?  From what little information there is (provided the information is good) PX will continue to head up and over the north pole of the sun for a relatively short distance, to the endpoint of its orbit, and then gravitational forces will pull it back to begin its 3,600-year journey back to the other end of its orbit.  The difference is that its homeward-bound journey will be traveling between the sun and the earth.  This means it will be much closer to earth.  Since a member of this complex is said to be a brown dwarf, highly magnetic, and earth has an iron core, we are in for a bumpy ride.  The brown dwarf, being a dead star, has no light of its own and only shows up when it is caught in our sun's light, such as this solar flare.

Well, euphemisms are fine, but it is thought it will be an extinction-level event (at least for those who do not prepare).  As for Marshall Masters' prediction for 2028, I can't judge his intuition.  PX's return voyage will be much faster, possibly due to a slingshot effect, though I think he accounted for that.  But the point being, don't wait until the last minute to prepare.  You should already be preparing for all the other things happening in our world.  Do what you can and don't worry it's not enough.  It won't be.  But the galactics help those who do all they can.  Ask and ye shall receive.  (Ref, http://www.fourwinds10.com/journals/html/J005.html, Chapter 5, starting on p.36.)

Looks like the round object is caught in the blast from the sun.

At first glance we can see that from the earlier images to this current shot, the object (if the same one) has moved from the 9 o'clock position to between the 8 o'cl0ck and the 7 o'clock position. We have to project that if it is indeed the same object moving slowly for the past few months, its present path is moving southward in its orbit. It appears to be the same one to me. Any thoughts?

I'm sorry this is so huge, I don't know how to downsize it. 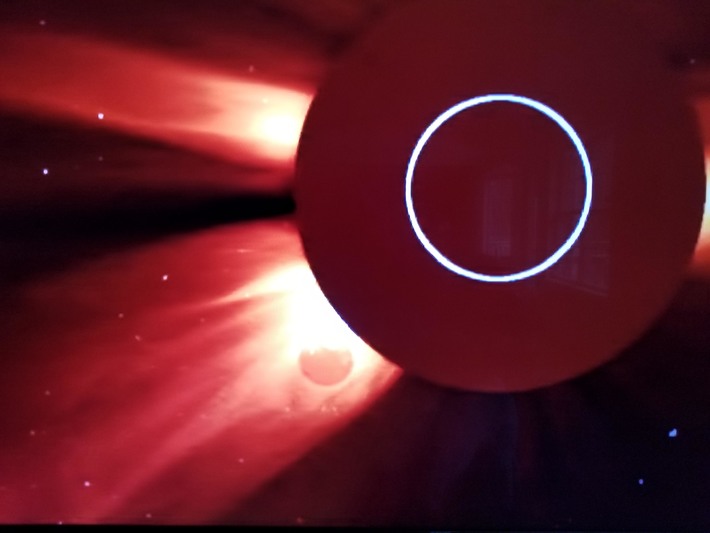 That saving plot sounds a lot like the Biblical 'taken away' and or the Rapture.

I have pondered that too...size, proximity, and time frame. When you think about our first indications...Nibiru shock video around 2005 was it? The system was so far away, nobody but the insiders really had a clue what was there, other than it didn't look good for us because of the trajectory. We hears a dual sun system, planetoid, dead star, black hole.....everything but the kitchen sink. However, looking at these latest images, and if this is the system in its entirety (and I don't think it is just one) it appears more like a lone planet with several orbiting asteroids/moons? That is why the right side brightness you mentioned could be the sun's plasma arcing off another planet or moon, while the left planet is seen.

Getting back to the time element, is we consider it tool 10-12 years getting THIS CLOSE, the earth being 93 million miles from our planet....we only have 4-6 years left. The elite made damned sure THEY were ready and all have their hiding spots, travel arrangements to get there, and purchased their kingdom lands for afterwards!!! They are all set, or so they believe their infallibility has ordained an easy ride. US...well. it's pot luck and prayers, isn't it.

That's why it puzzles me why this NWO crap is such a bother since they know we're going to be annihilated by this thing anyway. It wont take much to control those leftover/alive. Why bother NOW with this one world order business...we are going to be that when this is all said and done. Or, is it a last ditch call to initiate their feudalistic dominance when they surface??? Are they wanting the lesser wealthy countries here to take advantage of the created DUMBS? Having taken bribes from the highest foreign bidders for survival because their countries could not make DUMBS like ours? So, to make room for them, more of US have to die to make room? I have no idea.

Here are a few images run through Photoshop filters, to tease out details:

This first is bas relief.  It gives shapes to the dots.  They look like orbs, most look like moons.  And most seem to be emanating from the PX "bump" at ~1:15.  That bump was stationary for approximately three months.

Film Grain.  This one and the one above emphasize there is a light source, that is not the sun, in the upper right corner.  What could it be?

The Illumination will also fill people in on what is to happen when it is time to separate the wheat from the chaffe.

Thinking out, in text, how fast is it going and how soon will it arrive.  The diameter of the sun is ~865,000 miles.  (That's the white circle.)  The occulter is twice the size, 1.730 million miles.  So, somebody with a math brain might be able to figure out the mph PX is traveling.  It was close to the left edge of the occulter on 07/20/2020 and was almost beyond the right edge on 10/23/2020, so three months.  Also take into account it was not going straight across, but at an angle.  So, in three months it traveled some percentage of 1.73 million miles, divided by 3 = 576,666 miles per month.  So, some percentage of that would be it's monthly mileage.  We, of course, don't know how far out it will go before doing a slingshot, or how fast it will travel when coming inbound.  So, trying to compute a fly-by date is impossible, without NASA's computers.

That's why I don't accept Marshal Masters' "intuition."  I think it will be sooner than 2028.  It's possible it could slow down as it approaches its slingshot destination (for how long and by how much?), then once slung, it could speed up much faster than its initial approach, its journey before crossing the ecliptic.

And, as a reminder, these are interpretations of 3D objects on a 2D plane.  I take a guess that the PX entourage orbits around the main body, so those objects would be coming in and out of view in different images.  Plus, there are a lot of other things out in space, like sun-grazing comets, debris, etc., who knows what else.  These interpretations are general impressions.  But they do paint a picture.  Exactly what we may never know.  But why it disappeared is a puzzle.  If it was scrubbed, why weren't the prior frames scrubbed, too?

And one last question, what is that light in the upper right corner?  Oh, well, another day.