NOTICE:  This blog is complex and has been on-going for a long time.  Before this blog, there was another blog just as big, but it was deleted as Amy explains below.  It was reconstructed in part and continued here.  We encourage you to read and/or participate.  However, you are expected to have read this blog and all the comments from page 1 forward BEFORE you start asking questions.  There is much technical and background data you need to know in order to understand.  Please DO NOT jump in and start asking questions without having read this entire blog and comments first because it creates too much of a distraction to have to stop what we are doing and explain every time someone has a question that could have been answered if this blog had been read first.  Thanks for your cooperation.

I am really sorry for deleting the other ELE timeline post ... Terral did not have permission to post certain information, and it came back on him in the %$&. ... which led to a cleansing of the post on a few groups :( But, as sometimes happens, there is a Silver lining under this pile of .... the Brown Dwarf Star has been spotted, and was ID'd from a selection of mug-shots ... it is coming

This post covers almost all of the last posting, and was also by Terral.

The timeline below tracks the movement of the ELEnin dwarf star in our solar system through 2011 using the NASA Jet Propulsion Laboratory Data for their ELEnin Comet Psyop (link). 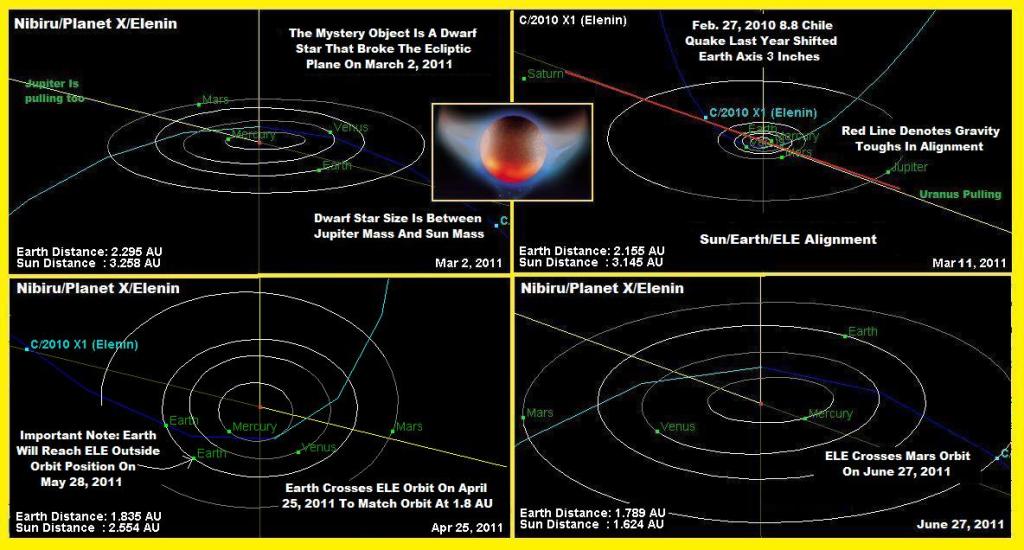 May 11 Earth, Mercury, Venus and Jupiter are in alignment to create optimum conditions for seismic activity. Diagram

May 28 Earth reaches ELE outside orbit position. 1.836 AU from Earth. 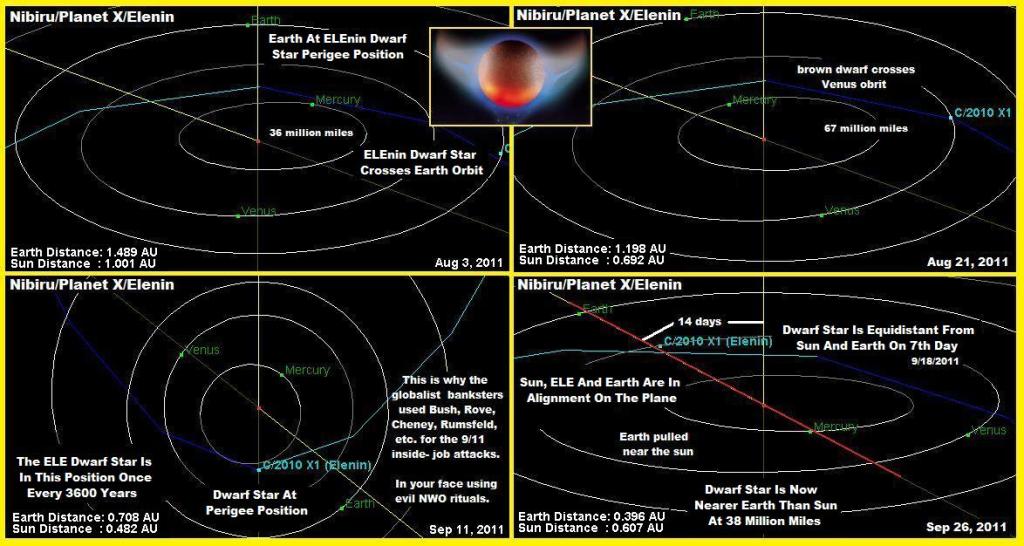 July 7 Saturn, Dwarf Star and Sun are in alignment where Saturn should show signs of the dwarf star assuming polarity control. 1.74 AU from Earth. Saturn Diagram. 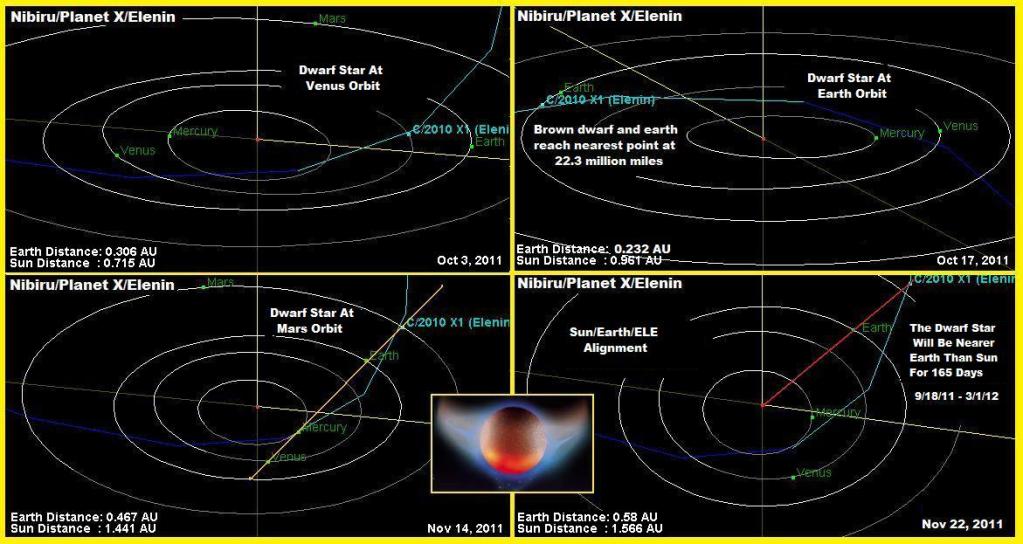 A dwarf star between Jupiter and Sun mass is approaching Earth from @ 10h 38m 24.48s +7 00' 49.68" (link) coordinates at 100,000 miles per hour covering 2.4 million miles each day from the Leo Constellation moving towards 44 Leo to break through the ecliptic plane on March 2, 2011. The dwarf star with a planetary object (Planet X) and multiple moons (pic is currently on an inbound trajectory between Jupiter orbit and Mars orbit to reach Mars orbit on June 25, 2011.

The dwarf star being currently tracked by NASA as the Psyop Leonid ELEnin Comet that came into alignment with Sun and Earth at the first of three alignments on March 11, 2011; which is what all the false flag psyop disinformation is calling the pole shift. The dwarf star was still too far away (2.1 AU) to assume polarity control of the Earth from the Sun. This March 11 alignment coincides with the February 27, 2010 ELE/Earth/Sun alignment that shifted earth aquifers and shifted Earth axis 3 inches with the 8.8 Chile Quake. The magnetic poles of our planet are not shifting, but are 'migrating' from the approach of the dwarf star mini solar system and the powerful magnetic field and polarity entering our inner solar system; which has been going on since 2004. The dynamic gravitational Tug-of-War between the Sun, Earth and Dwarf Star is enhanced by the near-alignment of seven planetary/solar bodies at this alignment shown in the first diagram above and demonstrated by a red alignment line depicting extreme gravitational force. These orbiting objects are connected to the Sun by magnetic portals (link), which the Earth passed through on 2/27/2010 and 3/11/2011 that connects the dwarf star to the Sun. The next major event for Dwarf Star is June 27, 2011, when the dwarf star crosses the Mars orbit. Then on July 7, 2011 the ELEnin dwarf star passes between the Sun and Saturn orbiting above the ecliptic plane, which should reveal some evidence that the dwarf star is attempting to gain polarity control over the ringed planet.

October 2 is the day that the ELEnin dwarf star crosses Venus orbit again to begin trekking in the direction of Earth. Our planet is still being pulled towards the Sun, but by this time we are also being pulled forward into the massive dwarf star gravity well. Two weeks go by (Oct. 17) and the dwarf star crosses the Earth orbit line to pass directly in front of our planet at just 21.57 million miles away, which is the nearest point in our encounter. The dwarf star crosses the Mars orbit line on November 14, 2011 on way to the third alignment on November 22 where the Earth passes directly between the two once again like on March 11. This marks the time of the Geological Pole Shift Reversal that tips the Earth back to near the current position, as the Sun regains polarity control from the dwarf star racing away from the inner solar system.

Draw your own conclusions.

The interview confirms documentary and Dr. Harrington's own hand, all the findings have already been discussed above in the so-called Stage 1 of the search for Nibiru.

Harrington himself, draw a diagram of the orbit of Planet X in the presence of Sitchin. Among other things, addresses the detection of anomalies in the orbits of the outer planets of the Solar System, the anomaly of the space probes, as well as issues concerning the future course of detection of Nibiru.

Harrington was the co-discoverer of Charon along with  James W. Christy , and took an active part of the project IRAD (IRAS) in 1983, where the results showed the initial detection of an object of 4-6 Jupiter masses, which prompted the initial search with  TC (Tom) Van Flandern  of Nibiru.

One of the main achievements of Harrington, was the determination of simulations of binary star systems, as well as plausible explanation for the elliptical orbits of asteroids and other bodies such as Asteroid  3216 Harrington  that bears his name.

In fact it was who coined the term "Failure of Sagittarius" as an explanation of the anomalies detected by the presence of the already named Nibiru. What is clear is that Nibiru was already Officer in 1990.

Then offer the unpublished interview between Dr. Robert Harrington Z.Sitchin and the August 30, 1990.

Transdisciplinary science accessible to all.

The unpublished interview of Dr. Robert Harrington Z.Sitchin in 1990. Nibiru was official in 1990.

Hey wait... I was just channeling the tooth fairy ... Rock's a cool guy, you know?  ROFLMAO!

I so agree with you notice how I articulated things.....

Its one hell of a stretch of the imagination to think of anyone channeling another being let alone Jesus, Adam, God, the tooth fairy....... I am not passing judgement on what they claim am just answering your question feasibly and politely.

Alex, but to claim they are Jesus, Adam and God?  Seems a bit over the top.  But what do I know, right?  To each his own.

Somewhere I read that our solar system has moved into a more active part of the galaxy.  Maybe we were in a cul-de-sac and are now out on a main road?

Comment by Alex Cortes on February 24, 2012 at 3:00pm
Tracy,
I think I get where you are coming from, why all this fuss, well because they want to survive like the next man pretty simple concept.  Are they excluding the masses, yes of course they are but there really isn't much we can do about that.  Now take step back and realize that we are ascribing reasons to actions taken by other people without ever asking them directly what are they doing.  A lot can be lost when making these types of assumption.  I am not saying the assumptions are wrong simply that they may be.   The sun is infinitely old, the earth is infinitely old, there are cycles that these two celestial bodies may go through that run the span of eons, we try to piece the picture together as well as possible but we really don't know if this is simply part of a long term cycle, (long count comes to mind).  There is no way for us to prove what the mayans were thinking of when they created the long count but boy do we speculate.  The same holds true with just about every aspect of life that we don't have a concrete hold on......  Yes much is said in the bible and please hear me out.  I am a believer in god, i am christian, and i love my faith but I know well enough to not take the bible as gods words simply because the church claims as much.  First thought that comes to mind is that there are a few million followers of the king james bible which would never have existed if James didn't want a divorce.....  History writen and oral has been altered by man more times than can be counted.....I leave my faith within myself and simply chalk up what is presented in the bible as a template for what is believed to be the right path.....I feel that my god will have little to no issues with me questioning works attributed to him.....its part of being just and all......

Comment by tracy arnold on February 24, 2012 at 2:37pm
If this was just a routine solar max or a 3 day pole flip why go through all the trouble of building elaborateunderground citys equipped with streets,power,homes,apartment buildings,schools,postal service,ponds and highspeed railways.yet alone on the surface of the planet u have internet,malls u can live in,etc.the sun is the x factor.ancients cultures as well as biblical veres in the bible talk about a burning or scorching and people cursing re the sun,that which the most high said he created first according to these texts.

No one knows. That, if nothing else is the universal truth that needs to be acknowledged.  If religious then your respective deity knows, other than the omniscient being at the head of most religions no one knows.  I for one have no clue and to say I have definitive proof on anything dealing with the earth changes would be a blatant lie on my part.  At some point people need to realize that there is a world of difference between "I believe" and "I know"  and sorry but its not an issue of conviction, its simply reality.  No one has ever experienced these changes in our life time yet we all speak as if everything we say is a certainty, which it is not.  Who is to say?  Not I, of that I am certain.  Its not an issue of me closing my eyes and pretending to be blind to what is happening, its an issue of me being willing to wait to find out and holding off judgment till then.