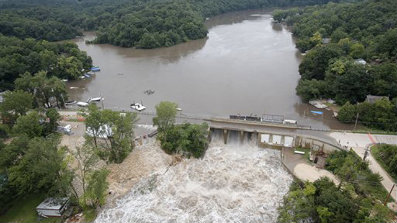 "It’s going to have a hell of a lot of velocity,” he told The Des Moines Register.

The dam, which sits on the Maquoketa River about 45 miles north of Cedar Rapids, failed following massive amounts of rain.

The road on top of the dam collapsed around 10:30 a.m., and water gushed over just before 1pm the newspaper reported.

Some media outlets are reporting the water reached the eaves of several homes and businesses in the immediate vicinity. Others report rushing water flooding over railings and onto roads and fields.

Authorities sounded flood warning sirens in nearby Hopkinton, a town of 700 residents, giving them five minutes to flee.

One homeowner told Fox News that all he can do is wait until the water gets to his town.

A flood warning was also announced in Monticello, which has a population of 3,700.

Officials do not know if the entire dam will give way, but residents in low-lying areas have been ordered to leave their homes and avoid the debris-filled water, Fox News reported.

There were no reports of injuries.

Comment by Alex Cortes on July 28, 2010 at 8:46am
Glad to hear you are safe Steve. Will try to touch base with you at some point this week.

Comment by desertrose on July 27, 2010 at 7:34pm
Yes, when I read the article on MSN, the thought that went through my mind was, " And so it begins".
Very eerie to see unfolding that which you have been hoping against hope would never come, yet watching the horizon knowing it could rear it's ugly head any day.
Thank you for posting this , Ronnie.

Comment by Coedwig the Druid on July 27, 2010 at 6:40pm
These are the sorts of things I was referring to in my 7 of 10 weather blog. I saw this disaster as it was unfolding as it is mere miles from me!
Steve