Absolute confirmation of the STARGATES from Q.  The graphic below was produced on 15 June 2019, and here is Q directly referring to it 23 days LATER on 8th July 2019.

Hannity has always meant WATCH the Stargate SG-1 re-runs.  They used the dutch word VOLGEN as code so that the Hannity meant STARGATE SG-1.  The female lead in the STARGATE SG-1 series is called SAmAntha CARTER, whilst Q used the Hannity reporter SArA CARTER's name as code for SAMANTHA CARTER, which is almost identical.   This is how Q makes the drops in coded form to avoid the censors.

They also use the word DIRECTLY in the 8th July 2019 drop, as they did in the Carter drop from 9th Sept 2018 10 months ago (bottom right corner), where they state: Q has DIRECTLY told us to watch Hannity.' 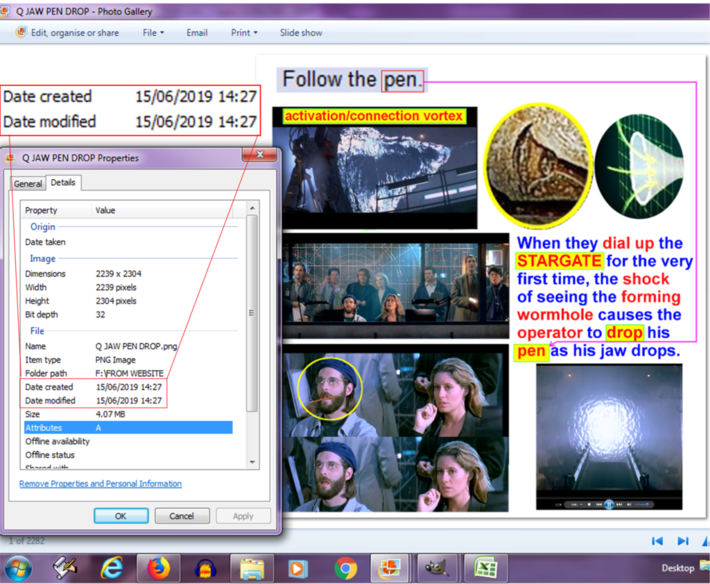 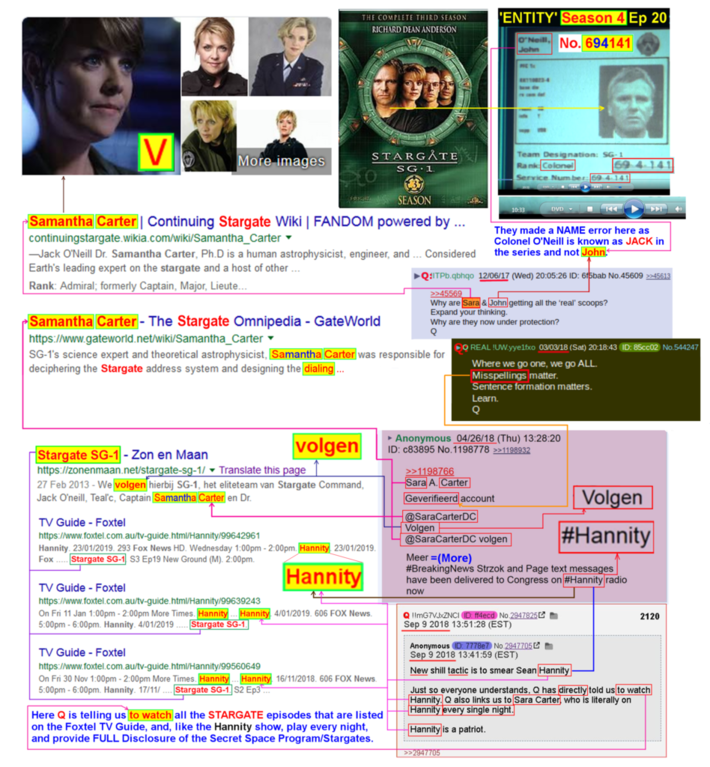 Hi guys.  I can only decode what is there. Q said fast military trials and mentioned death penalties.  The crimes are beyond atrocious, and crimes that people like us simply could not committ. I cannot comment further other than to agin advise that you go read the evidence.  It is proven in ways that blow the mind.  That is why Q has dropped over 3,000 posts.  All I can say is this: How do you get the public to want, in their hearts, the change we so badly need? To confront them with the most dispicable and evil truth the world has ever seen, so that they are totally outraged and demand the change.  It is only this degree of disclosure that will achieve that.  It's a very clever strategy.  The millions how blindly worship the fake tan creep in the WH will be more outraged than those that never worshipped him.  The backlash will be on an epic scale BUT order must be maintained. The whole point of the operation is to bring peace and freedom to our world NOT make it worse.  I don't have the exact plans as I'm only me melding my testominy with the key testimonies of other witnessess and researchers.  They know what they are doing. Again if we want the full facts you have to take the time to read the evidence. I can't do it for you!  P.S The D party has only ever meant the Donald Paedo Party AND the testomony of abuse victim Donald Marshall.  Wayne Herschel's input is massive and confirms that the movement is headed from benevolant beings. He proves it in away that cannot be denied or argued.  He's had a life of hell and threats same as all the key witnessess.  Fiona Barnett is also another key witness. It's all there ready to be read.

Yay in his eights and going like all of the time!

As I am wont to say, Byron, another day in effen paradise.

I know the truth will be a surprise for us all.  Maybe a non-human was needed to get through what Trump has been subjected to.  Just a thought.

IQ since there is such a divide between Love Trump Hate trump do some of the haters really have reason to hate him or is it just a big game of confusion and does the end result have a serious result for all  who like him and hate him for the wrong reasons, it seems to me we have all been duped again which just seems to be another day on paradise Earth. I can only hope those who have been following Q are not going to have a mental breakdown when they find out who the Donald really is, I am having a problem but have adapted myself to realizing most of our lives is a lie and when another one arrives I am able to accept it. Hope I made enough sense  to you.

Well, IQ, it will take time to assimilate this new information.  Some things you brought up could (possibly) be misinformation he put out for a specific purpose.  But how would we know?

As for the D penalty for T, do cloned beings have no rights (or are they subject to our laws even if they are not human?) or couldn't they just be reprogrammed, or?

OK Guys.  Again the entire Q story is supposed to be read from beginning to end in order to see exactly what is going on AND what is planned for afterwards.  Because the task has taken 20 months with drops layered and new material constantly added as the story unfolded, no one yet has been able to read it in full except me, so by design, and not your faults, you are both missing huge chunks of the narrative, as is everyone else, with most missing nearly all of it, because very few, other than you guys here and those at Onstellar know where to find it.  POTUS has 3 different meanings. That was the absolute key to addressing what would otherwise be completely confusing statements re Trump.  The plan is revealed at the end of Part 6, even down to how they will announce it.  How can Trump be a night in shining armour when he made that 9/11 sheep TV commercial or mocked the SWAMP Cameroon Plane crash?  Yes even SWAMP has a double meaning.  They attacked a plane in Cameroon that crashed off the end of the runway into a SWAMP. Trump makes a sick joke about it in his Christmas NORAD phone call with kids. You're missing critical evidence here......he is a CLONE under A.I control.  He thinks is he untouchable like the rest of them.  A programmed clone, like a computer, is just that- a programmed being. That is why Q has just re-released the Hillary footage of her freaky head wobbling incident.  Section 3 has a GIGANTIC section on the cloning which is then raised again in section 6.  If you go back to the Drop the Pen in this post- it also says ARTIFICIAL and TONE. Tone is code for CLONE. I didn't expand it with that part because I wanted to focus on the Stargate part.  If you've seen my latest post today- THAT one confirms the cannibalism and cloning.  That's what Trump is talking about when he says they GROW them well. Good stock.   He is not the same species as us. Dolly the cloned sheep still looked like a sheep.  Cloned humans still look human.  They started interspecies cross breeding programs in Iran and NK called Nuclear T Cell division.  POTUS also means People of the United States, which in turn means people everywhere in every country.  It also means Prince of the Underworld's Servant. So when Q says POTUS was the duly elected President he means the duly elected Prince of the Underworld by the Deep State.  No one else is able to decode Q because they weren't meant to.  But the movement needed to be grown without causing mass panic, which could not have been achieved if everyone thought the US President was the DS, as is everyone else and that Q are good ETS working with the military.  The plus + after the Q  also has 3 meanings. The cross on the SWISS flag where CERN is, meaning Stargate. It also means the cross of Orion as in starmap. Finally it means paid for by SOROS.  Q no more billionaires, Presidents, monarchy.  Have you seen anyone anywhere even come close to decoding Q? They can't and if they could they wouldn't be on YT, Facebook, Twitter etc.  It's a case of the BIG read! Each country will have a counsel of 7 with each person on ordinary incomes with no donations allowed and full auditing and rotation.  Billionaires will be stripped of all their wealth which has been stolen from all of us.  It is not normal to have 4 billion starving and living in complete poverty.  Trump will get the death penalty. He has participated in all the world famous child killings.  It's all there and proved. Hope that helps.

Good question Cheryl does Trump have a plan we cant see yet or figure out.

IQ I really never thought Trump was  Q but I did think he was a knight in shinning armor either, just a better than average human and rich enough to be excepted by the controllers, who we don't want controlling much of anything.

I also question his six, six ,six signs. Thanks for confirming some of my important thoughts.

Trump is allegedly Q+.  What I don't get is why he would put himself in harm's way if he were a black hat?