It is common knowledge of the legend, that on the evening of October 27th with the armies preparing for battle, Constantine had a vision which led him to fight under the protection of the Christian god. He followed the commands of his dream/vision and marked military shields with a sign "denoting Christ". However, the appearance of the cross has been debated whether it was a "Staurogram", or a Latin Cross or the better known Chi-Rho sign described by Eusebius. It’s just basically variations of P and a cross…

Please take the time to look at these symboles below:

From the Eusebius account, concerning the vision of the cross seen by Constantine while marching outside of Rome, he looked up to the “SUN” and saw a cross of light above it, and with it the Greek words "Εν Τούτῳ Νίκα". The Latin translation is in hoc signo vinces—"In this sign, you shall conquer".

ODDLY ENOUGH-The sign/cross that Constantine saw above the sun was denoted as PX……yes, a cross with a P at the top… Today we refer to PX, and watch the SUN daily for Nibiru and the impending pole shift.... 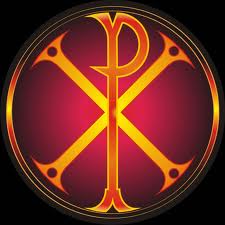 On Oct, 27th 2012, it will be 1700 years since the Constantine PX Vision…A possible mid-point pass that Constantine witnessed?…Interesting nevertheless...

Another bit of information is that Patrick Geryl is also using the Oct. 27th date this year in his mathematical SUN SPOT equation…https://www.youtube.com/watch?v=tJQewoXhRA0&feature=player_embedded

SO is there possible significance concerning the SUN DATE and perhaps... we are on to something concerning the Constantine SUN VISION DATE of October 27th 312....The vision, sign and symbole of PX.......

One last ODD thing to list: Not only did a Spiral in Norway appear on the Eve, Obama received the Nobel Peace Prize..BUT on Obama’s "Leo" birthday of August 4th 2010 the earth had a light show from the direct strike of the Solar Tsunami..

Let us track the PX of the most "ancient of days" up to present..Your in-put will be greatly appreciated.

HAPPY THANKSGIVING and GOD bless us and keep families safe so they can enjoy one another..!!!

Keep in mind that the tree planted in 1978 was removed before the tree's 33rd Illumination year in 2011, and not only that, the 87th Illumination anniversary of 1923 was completely skipped by the President and advanced by one year ..

This is symbolic for sure....

Let's pray for some amazing days ahead..

Well let's see.. The inauguration of the US President was on March 4th, which was in Pisces and it was done to commemorate our Constitution which was ratify on March 4, 1789 ...

But let's look at something..

Something going to happen that may change the face of the world by 2018?

UP-date of what I was watching..  As above in the heaven's, so below on earth...The sign appeared manifesting on different levels.. National, state and county..

The White House National Christmas Tree "Illumination" event was altered and the 87th anniversary was removed... Watch video's here as it was completely skipped... http://www.godlikeproductions.com/forum1/message2695004/pg1

Comment by Alesiah on September 26, 2010 at 12:55am
The Constantine cross is certainly not the traditional crucifix... I'd say the PX abbreviation we're using for Nibiru/Poleshift is a literal sign in itself...Too much of a coincidence in the world of ancient/modern subconscious symbolism ..