WHY DID RUSSIA BAN MICROWAVE OVENS ? Because they care about their people. 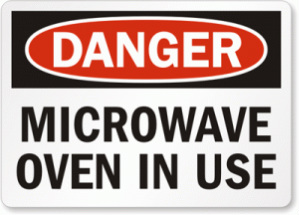 Consumers are dying today in part because they continue to eat dead foods that are killed in the microwave. They take a perfectly healthy piece of raw food, loaded with vitamins and natural medicines, then nuke it in the microwave and destroy most of its nutrition. Humans are the only animals on the planet who destroy the nutritional value of their food before eating it. All other animals consume food in its natural, unprocessed state, but humans actually go out of their way to render food nutritionally worthless before eating it. No wonder humans are the least healthy mammals on the planet.

In Russia, microwave ovens were banned in 1976 because of their negative health consequences as many studies were conducted on their use. The ban was lifted after Perestroika in the early 90’s. Numerous documents can be found online relating to this topic.

The invention of the microwave and its mass adoption by the population coincides with the onset of obesity in developed nations around the world. Not only did the microwave make it convenient to eat more obesity-promoting foods, it also destroyed much of the nutritional content of those foods, leaving consumers in an ongoing state of malnourished overfeeding. In other words, people eat too many calories but not enough real nutrition. The result is, of course, what we see today: Epidemic rates of diabetes, cancer, heart disease, depression, kidney failure, liver disorders and much more.

These diseases are all caused by a combination of malnutrition and exposure to toxic chemicals (plus other factors such as emotional trauma, lack of exercise, etc.). Microwaves make malnutrition virtually automatic, and being exposed to toxic chemicals is easy to accomplish by simply eating processed foods (which are universally manufactured with the addition of toxic chemicals that act as preservatives, colorings, flavor enhancers and so on). 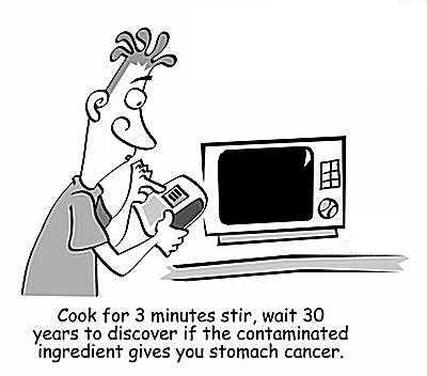 Microwaving is, technically, a form of food irradiation. I find it interesting that people who say that would never eat "irradiated" food have no hesitation about microwaving their food. It's the same thing (just a different wavelength of radiation). In fact, microwaves were originally called "radar ranges." Sounds strange today, doesn't it? But when microwaves were first introduced in the 1970's, they were proudly advertised as radar ranges. You blast your food with high-intensity radar and it gets hot. This was seen as some sort of space-age miracle in the 1970's. Perhaps someday an inventor will create a food heating device that does not radically alter the nutritional value of the foods in the process, but I'm not holding my breath on this one. Probably the best way to heat foods right now is to simply use a countertop toaster oven, and keep the heat as low as possible.

The microwave does work as advertised, by the way. It makes your food hot. But the mechanism by which heat is produced causes internal damage to the delicate molecular structures of vitamins and phytonutrients. Minerals are largely unaffected, however, so you'll still get the same magnesium, calcium and zinc in microwaved foods as you would in non-microwaved foods, but the all-important B vitamins, anthocyanins, flavonoids and other nutritional elements are easily destroyed by microwave ovens.

The microwave is the appliance of the living dead. People who use the microwave on a regular basis are walking down a path towards degenerative disease and a lifelong battle with obesity. The more you use the microwave, the worse your nutritional state gets, and the more likely you are to be diagnosed with various diseases and put on pharmaceuticals which, of course, will create other health problems that lead to a grand spiraling nosedive of health.

Do yourself a favor: Toss your microwave, or donate it to some charity. It's much easier to avoid using the microwave if you don't have one around. It will clear up counter space, save you electricity and greatly enhance your dietary habits. When you need to heat something, heat it in a toaster oven or a stovetop pan (avoid Teflon and non-stick surfaces, of course). Better yet, strive to eat more of a raw, unprocessed diet. That where you'll get the best nutrition anyway. Buy yourself a Vita-Mix and blend up some smoothies. It's faster than microwaving foods are far healthier. (See my book Superfood Smoothies for recipes).

I drink a superfood smoothie every morning, and I haven't used a microwave in years. Protecting health is our own responsibility, and it's up to us all to make informed decisions about how we buy, prepare and consume our foods. You have to save yourself. 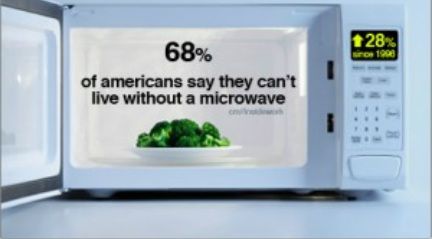 Here are some of recent scientific findings on microwaving food:

1. Microwaved foods lose 60 ~ 90% of the vital-energy field and microwaving accelerates the structural disintegration of foods.

4. Microwaving alters food chemistry which can lead to malfunctions in the lymphatic system and degeneration of the body’s ability to protect itself against cancerous growths.

5. Microwaved foods lead to a higher percentage of cancerous cells in the bloodstream.

6. Microwaving altered the breakdown of elemental substances when raw, cooked, or frozen vegetables were exposed for even a very short time and free radicals were formed.

7. Microwaved foods caused stomach and intestinal cancerous growths, a general degeneration of peripheral cellular tissues, and a gradual breakdown of the digestive and excretive systems in a statistically high percentage of people.

9. The microwave field next to a microwave oven caused a slew of health problems as well.

10. Heating prepared meats in a microwave sufficiently for human consumption created: * d-Nitrosodiethanolamine (a well-known cancer-causing agent) * Destabilization of active protein biomolecular compounds * Creation of a binding effect to radioactivity in the atmosphere. * Creation of cancer-causing agents within protein-hydrosylate compounds in milk and cereal grains.

11. Microwave emissions also caused alteration in the catabolic (breakdown) behaviour of glucoside – and galactoside – elements within frozen fruits when thawed in this way.

12. Microwaves altered catabolic behavior of plant-alkaloids when raw, cooked or frozen vegetables were exposed for even very short periods.

14. Due to chemical alterations within food substances, malfunctions occurred in the lymphatic system, causing degeneration of the immune systems’ capacity to protect itself against cancerous growth.

15. The unstable catabolism of micro-waved foods altered their elemental food substances, leading to disorders in the digestive system.

16. Those ingesting micro-waved foods showed a statistically higher incidence of stomach and intestinal cancers, plus a general degeneration of peripheral cellular tissues with a gradual breakdown of digestive and excretory system function.

17. Microwave exposure caused significant decreases in the nutritional value of all foods studied, particularly: * A decrease in the bioavailability of B-complex vitamins, vitamin C, vitamin E, essential minerals and lipotrophics * Destruction of the nutritional value of nucleoproteins in meats * Lowering of the metabolic activity of alkaloids, glucosides, galactosides and nitrilosides (all basic plant substances in fruits and vegetables) * Marked acceleration of structural disintegration in all foods. 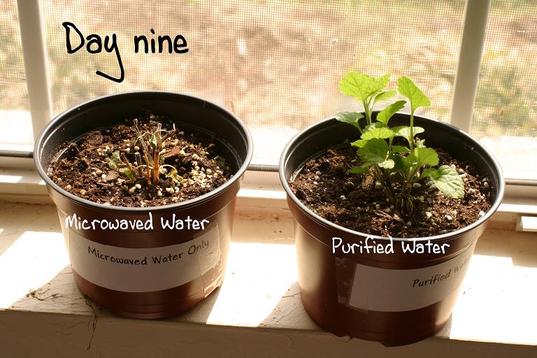 Mike from Natural News.com says,     On Microwaves:      "The rise of widespread nutritional deficiencies in the western world correlates almost perfectly with the introduction of the microwave oven. This is no coincidence. Microwave ovens heat food through a process of creating molecular friction, but this same molecular friction quickly destroys the delicate molecules of vitamins and phytonutrients (plant medicines) naturally found in foods. One study showed that microwaving vegetables destroys up to 97% of the nutritional content(vitamins and other plant-based nutrients that prevent disease, boost immune function and enhance health).”“In other words, eating raw broccoli provides you with natural anti-cancer medicine that’s extremely effective at halting the growth of cancer tumours. But microwaving that broccoli destroys the anti-cancer nutrients, rendering the food “dead” and nutritionally depleted. There’s even some evidence to suggest that microwaving destroys the natural harmony in water molecules, creating an energetic pattern of chaos in the water found in all foods. In fact, the common term of “nuking” your food is coincidentally appropriate: Using a microwave is a bit like dropping a nuclear bomb on your food, then eating the fallout. (You don’t actually get radiation from eating microwaved foods, however. But you don’t get much nutrition, either.)”

So. if you are going to use a microwave oven, it is suggested that you set and walk out of the kitchen where practical. The American FDA advised “don’t stand in front of a microwave for long periods of time”. There is a lot of researching being conducted into microwave oven and the effects that it may have on human bodies. Final studies have not been released as yet, but if the above is any indication to the negative affects on food, I can only imagine the effects on the human body. So if you don’t have to use a microwave oven, then don’t. Even if it is to preserve the quality and nutritional value of your food."

Do you and your family a huge life saving favor, throw away the microwave!. Spend a little longer preparing a meal, live a longer healthier life! – Apparently Apparel

I do not have a microwave because every time I had to test them for radiation leakage, I felt sick. The butter flavor of pop corn is called Diacetyl. The food industry may have change this ingredient by now. It was causing lung degradation of people who smell the pop corn fresh from the oven or who word in food processing plants.

This is short and sweet about popcorn, http://abcnews.go.com/GMA/story?id=3179470

I heard the microwave pop corn isn't the best.  At least it isn't used here that much.  I may have to find a healthier way to make it.

The chemicals in microwave popcorn are very unhealthy, too.

I have wondered for a long time if micro waves were not made on purpose to make us sick. Yes Pat popcorn does taste so much better. What I found scary was that it could actualy kill water.

I only use mine for popcorn or warming a small portion of something. Have been thinking of making popcorn on the stove the old fashioned way. I know it would taste better.

I rarely use the microwave.  I use my stove top, oven, or toaster oven to cook with.   Once in a blue moon I use the microwave to heat up left overs and sometimes my family uses it to pop popcorn.  That's about it.