More Evidence PX Is Out By Jupiter 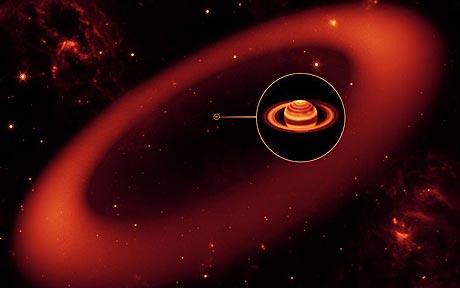 This is an image of the newest ring around Saturn, newly discovered and discussed in this October 7, 2009 article.  Could Planet X have played a part in the formation of this ring?

This next image was posted November 5, 2009, but the image itself is undated.  Its focus is on a UFO (the article is worth the read), however, wouldn't you think if an infrared camera was used that it would have picked up the larger ring?

There could be technical reasons why the newest ring isn't in this image, such as it is an older image, or a different or less sensitive camera was used, or the focus was too narrow, etc.  However, it could also mean that the newest ring simply wasn't there (which should be researched to see if an image exists that shows when it did form), but either way it is there now.  The next few images will provide support for the hypothesis of how the newest ring around Saturn came to be. 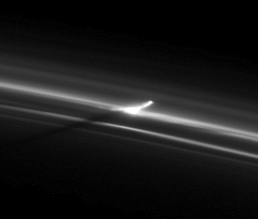 Here is an enlightening quote from the article:  "It's not exactly clear what's going on here, even in this slightly zoomed shot. But it looks for all the world - or worlds -- like some small object on an inclined orbit has punched through Saturn's narrow F ring, bursting out from underneath, and dragging behind it a wake of particles from the rings. The upward-angled structure is definitely real, as witnessed by the shadow it's casting on the ring material to the lower left."  Hmmm, "inclined orbit," "underneath," "upward-angled" all sound like the object came up from below the ecliptic, toward the South Poles of our solar systems' planets.  Is this the work of a loner, or could it be part of an entourage?

Next is an image of Jupiter on the day it was hit in its south polar region by something on 07/19/2009
(top dark spot--camera images are flipped): 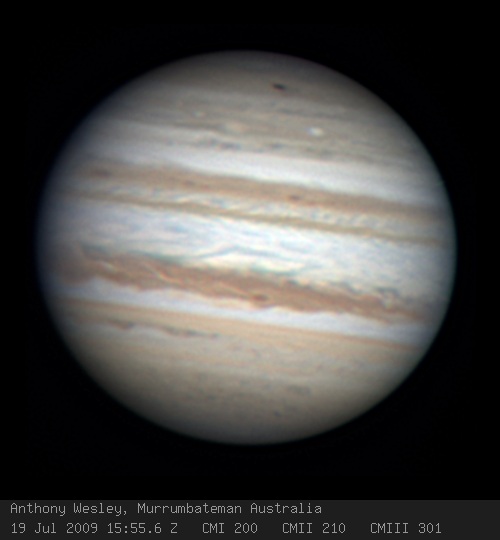 In conclusion, with all this evidence it seems reasonable to suggest that Saturn's newest and never-before-seen ring could be the product of a passing brown dwarf.  It could be parts of its debris trail trapped in some sort of a gravitational or magnetic field around Saturn and its rings.  Could it have formed as a result of Saturn's and Planet X's fields co-mingling?  It is thin.  Could it become permanent or will it fade away after PX has moved out of range?  Unknown.  But for now, it looks likely that Planet X has left its calling card.

Another video of the Star of David comet/asteroid.

NASA's Hubble Space Telescope Wide Field Camera 3 has captured an image of a Unidentified Flying Object (UFO) which shows a bizarre X-pattern of filamentary structures near the point-like nucleus of the object and trailing streamers of dust at 90 million miles away from the Earth. The object was first discovered by the LINEAR (Lincoln Near-Earth Asteroid Research program) sky survey on January 6. Although many scientists and astronomers have been stunned by unprecedented event, NASA has since declared that the object is a result of two asteroids slamming into each other at speeds exceeding 11,000 miles per hour. NASA believes that the X-debris pattern, named P/2010 A2 survived the impact, and that the other asteroid disintegrated fully.

But does this explanation from NASA makes sense? Does asteroids normally take that shape or form? Have you ever seen or heard of an asteroid that looks like Poseidon's flaming Trident with what looks like three prongs at the front?

"The behavior is not typical of comets, UCLA investigator David Jewitt explains, and researchers believe something unprecedented has been spotted: This is quite different from the smooth dust envelopes of normal comets. [...] The filaments are made of dust and gravel, presumably recently thrown out of the nucleus. Some are swept back by radiation pressure from sunlight to create straight dust streaks. Embedded in the filaments are co-moving blobs of dust that likely originated from tiny unseen parent bodies." - Huffington Post. http://www.huffingtonpost.com/2010/02/02/asteroid-collision-sugges_...

Cheryl this is amazing what you've put together..

And I'll add some information:

As you know, the Hebrews/Jews keep the Sabbath from sunset Friday until sunset Saturday...

Saturday according to Roman mythology represents the planet Saturn.... So technically for this research bit we could call them the Saturn Keepers, and oddly enough they are represented by the hexagon Star of David. Wonder if there is a connection here? LOL

Is this 'harvest' the only, the final?

Maybe 'harvest' needs to be defined better for those of us who aren't familiar with Ra. Do you mind, Paul? 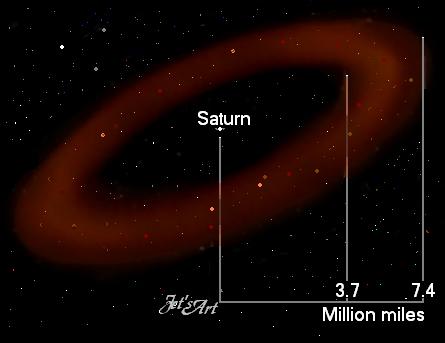 Morris, I can't find an original photo (date/time stamped).  I don't know if this is another artistic representation.  When I enlarge it, the stars look odd.